JD Cymru Premier at 30 | Two clubs that set the standard

Over the course of the last 30 years, Barry Town and The New Saints have dominated the domestic game across two different eras, winning 21 of the 30 league titles between them during that time while enjoying some memorable European nights in the process.

One constant debate between long-time followers of the national league centres around which team were actually the best. Competing on the domestic and European stage between two different periods means the comparisons will always be subjective, and while The New Saints have twice as many league titles as Barry Town and broke a world-record for consecutive victories in 2016, it was Barry Town that set an incredibly high standard for others to follow during their era of dominance in the late 1990s and early 2000s.

Barry Town won the first of their seven league titles in 1995/96, and the following year they completed the treble. The then-named League of Wales was still in its infancy having only been founded in 1992, but the club seized the initiative and established themselves as the only full-time professional team in the league. Gary Lloyd was an influential figure in their success having moved to Jenner Park from Llanelli in 1995, and won 16 trophies during his time there, including all seven of the club's league titles.

“We were a great team,” explained Lloyd to faw.cymru in 2016. “It didn't matter who we were playing, we were always confident of winning the game. It didn't always happen that way, but we were always a confident side. It was a fantastic time.  It wasn't the same side every year, there were changes, but everyone got on with everyone, it was brilliant. It never got too easy and we had to keep our standards high. Teams did make it hard for you as they always want to beat the teams that were at the top.”

In 1996/97, Barry Town won the league with a record 105 points, and almost matched the feat the following year when they registered 104 points. They scored over 250 league goals during those two campaigns, and under the management of Paul Giles, Gary Barnett, Kenny Brown and Peter Nicholas they celebrated domestic success and famous European results. “We had a nice mix of players from Wales and England,” reflected Brown in 2017. “But what I remember the most is what a friendly and family-orientated club it was, and that was something that was driven from the top. Paula O’Halloran had recently taken over the running of the club when I arrived and that was something she really wanted the club to be about.

“I went to the Champions League draw as manager, and because we were regular participants in Europe, everyone knew who Barry Town were. We were rubbing shoulders with the big names, and it shows where the club was at the time, which is all credit to the owners who made it possible. It turned sour in the end, but it was an invaluable experience, and I thought I handled the whole situation in the right way. I wouldn’t let the way it all ended cloud what was a special time at my career.”

As Brown indicated, hard times hit Barry Town following that era of success, but before they dropped down the pyramid and returned as Barry Town United there was an indication in 1999/00 about where the baton success would be passed next. Total Network Solutions upset the expected order to win the league that season as they finished two-points above Barry Town following the initial investment from Mike Harris into Llansantffraid, and while the Linnets would reclaim their crown over the next three years before Rhyl emerged to enjoy a brief period of success under John Hulse, TNS would set the long-term standard for the league by winning another 13 titles from 2004/05 onwards. 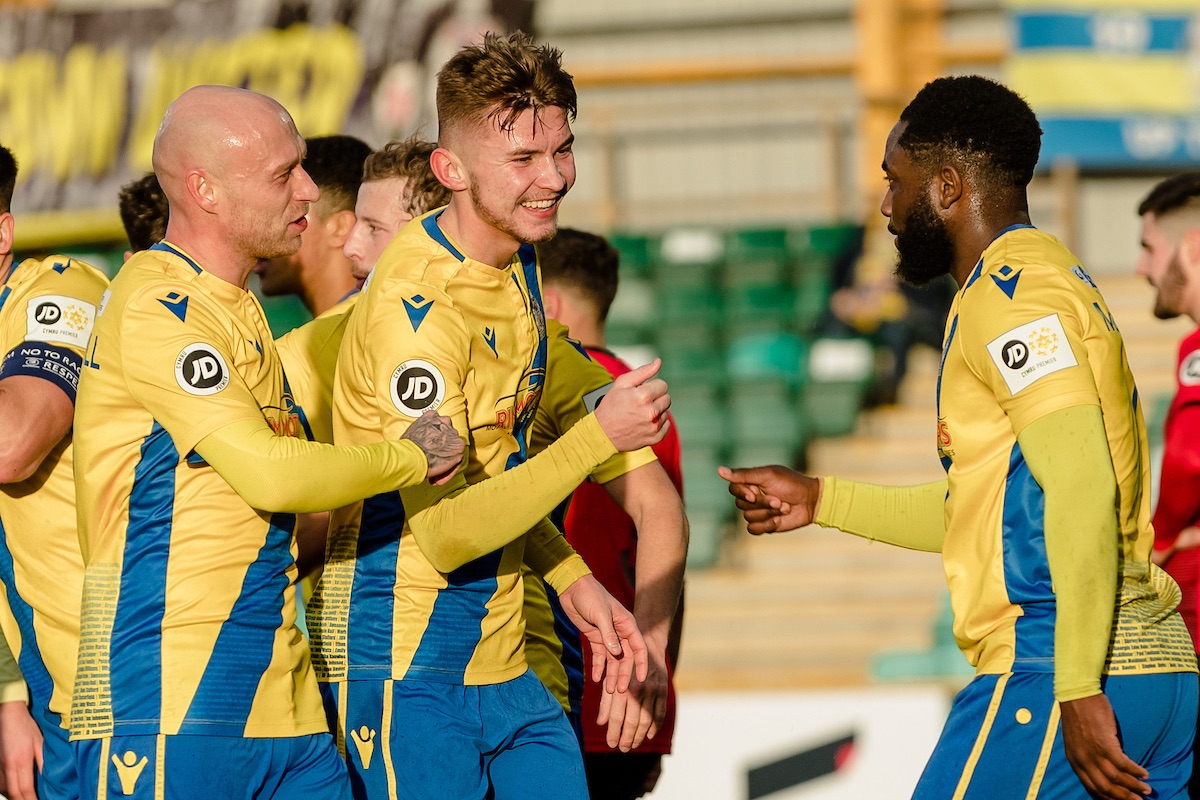 The New Saints have won 10 league titles over the last 13 years, and the current champions continue to set a high standard for other clubs to try and reach. Craig Harrison won 13 trophies during his first spell as manager at Park Hall between 2011/12 and 2016/17, and returned to the club this season following their disappointing performances in Europe over the summer. Having already guided the club to six league titles during his previous tenure, Harrison also masterminded the world-record run of 27 consecutive victories in all competitions at the end of 2016 that broke the previous record held by the great Ajax side of the early 1970s.

“Breaking a World Record is not something you go into football hoping to do – whether you’re a player, manager, or coach, it just isn’t on your radar – but we managed to do it at TNS and it was an absolutely amazing experience,” said Harrison last year. “It was very surreal, we didn’t aim to do this or anything like that, but now that we have done it I don’t see it being broken any time soon, really. We can't compare ourselves with Ajax, but it was a wonderful achievement, and everyone who was a part of that moment should be very proud.”

Another feat that Harrison is proud of during his first spell at Park Hall was achieving the double treble by winning all three major domestic honours for two seasons running in 2014/15 and again in 2015/16. “We had everything we needed to be successful but to achieve the treble was quite surreal,” he explained. “We always try to win as much as we can, and it is always nice to win trophies, but to win all three domestic trophies was very special and historic. That side’s winning mentality was relentless, the players were really focused and tuned in and to do it once was very special, but to do it twice was absolutely amazing.”

But while the two clubs have set the standard for sustained domestic success, they have also enjoyed famous European nights. Barry Town impressively eliminated Dinaburg and Budapest Vasutus before being knocked-out by Aberdeen in the 1996/97 UEFA Cup, and made history by becoming the first Welsh club to progress in the UEFA Champions League in 2001/02 when they defeated FC Shamkir in both legs. They would be eliminated by FC Porto in the next round, but claimed a memorable 3-1 victory in the home match against the Portuguese champions.

Meanwhile, The New Saints made headlines in 2010/11 by defeating Irish side Bohemians 4-0 in the Champions League and have progressed through the 1st qualifying round of the competition five times in total. One of their most impressive campaigns came in 2021/22 under former manager Anthony Limbrick when they comfortably defeated Glentoran and Kauno Žalgiris in the UEFA Europa Conference League, scoring 10 goals against the latter, before being narrowly defeated by Viktoria Plzeň on penalties after drawing 4-4 on aggregate against the Czech side who are currently competing in the group stages of the Champions League.

Barry Town and The New Saints are considered the flagship clubs across two different eras of the national league, and the standards that both teams set defined those eras both domestically and on the European stage. Statistically, The New Saints are the most-successful club in the history of the league and they are far from finished as they target another season of success this year, but it was the initial standard set by Barry Town as the first full-time club that started the journey for those that followed them.

Cwmbran Town were the inaugural champions back in 1992/93, while Bangor City (3), Rhyl (2), Connah's Quay Nomads (2) and Llanelli (1) have also claimed the league title over the course of the last 30 years. Great players and managers have been behind these great teams, but it is the sustained success that separates Barry Town and The New Saints from their rivals. Both have set unique records that may not be broken for many years to come, and while the debate over which team is the best continues, their achievements will always be remembered and celebrated.

All six JD Cymru Premier fixtures this weekend take place on Friday night, with plenty of intriguing battles to look forward to.

Match officials for this weekend’s Cymru Leagues fixtures have been confirmed.

It has not been a bad few weeks for Neil Gibson. His Connah’s Quay Nomads side are currently on a 12-match unbeaten run, he was named the JD Cymru Premier manager of the month for October and has been rewarded with a new two and a half year full time contract at Deeside.