It was 30 years ago that the Nathaniel MG Cup was won for the first time as Afan Lido and their talented squad of local players defeated Caersws 4-3 in a penalty shoot-out at Aberystwyth.

David Rees was player-manager of Afan Lido at the time, while Wrexham legend Micky Evans was the man who guided Caersws to that first League Cup Final. Caersws and Afan Lido finished eleventh and twelfth respectively in that inaugural league campaign while Cwmbran Town were crowned as the first champions of the new national league.

Mark Robinson is the current General Manager at Afan Lido as the Port Talbot-based club compete in the JD Cymru South, and the former defender was a substitute back in May 1993 as the side ended their first season in the national league with silverware.

“It was a special day for the club,” reflected Robinson this week. “It was the first year of the league and we took a couple of buses up there and went up the night before. We trained on the University field at Aberystwyth so our preparation was great, but it was a very, very tight game. Both sides more or less cancelled each other out. We had a young side but with a couple of older heads which were vital, and ultimately that pulled us through in the penalty shoot-out in the end.” 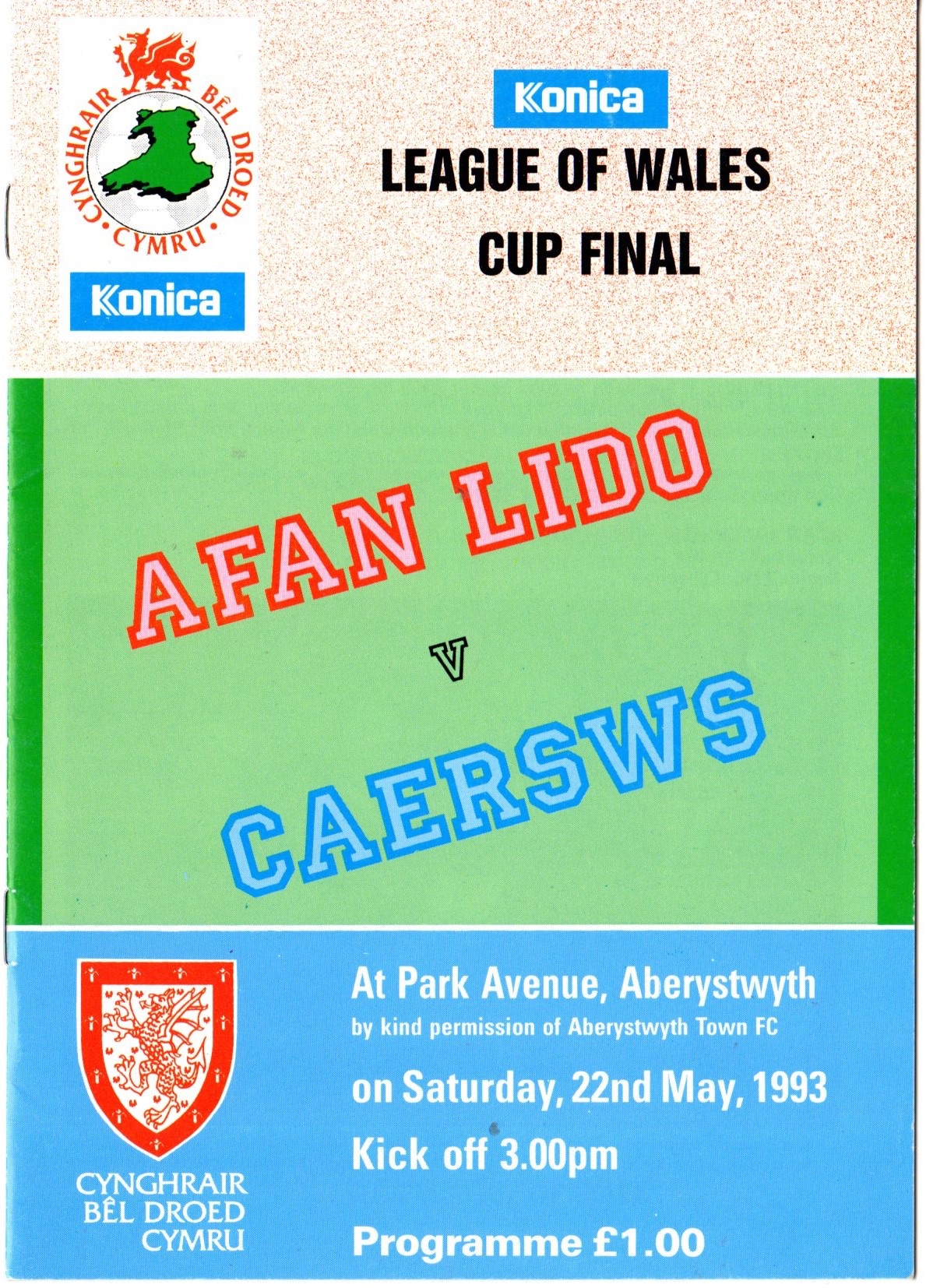 “To have Afan Lido and Caersws in the first League Cup Final probably shocked a few people as there were higher-profile teams in the league than us two,” said Robinson. “It could have gone either way, but fortunately for ourselves we were victorious, and it started off a good run for us as we won the cup again the year after.”

Andrew Webber scored the goal for Afan Lido in that first final as it finished 1-1 after extra-time, and the side would retain the trophy the following year with victory against Bangor City. But it was in 1994/95 that they achieved their greatest success as they finished runners-up in the league and qualified for Europe.

Incredibly, the success that the club enjoyed during that era was achieved with a team of local players, with the entire squad that lifted the League Cup in 1993 all emerging through the junior ranks of the club. 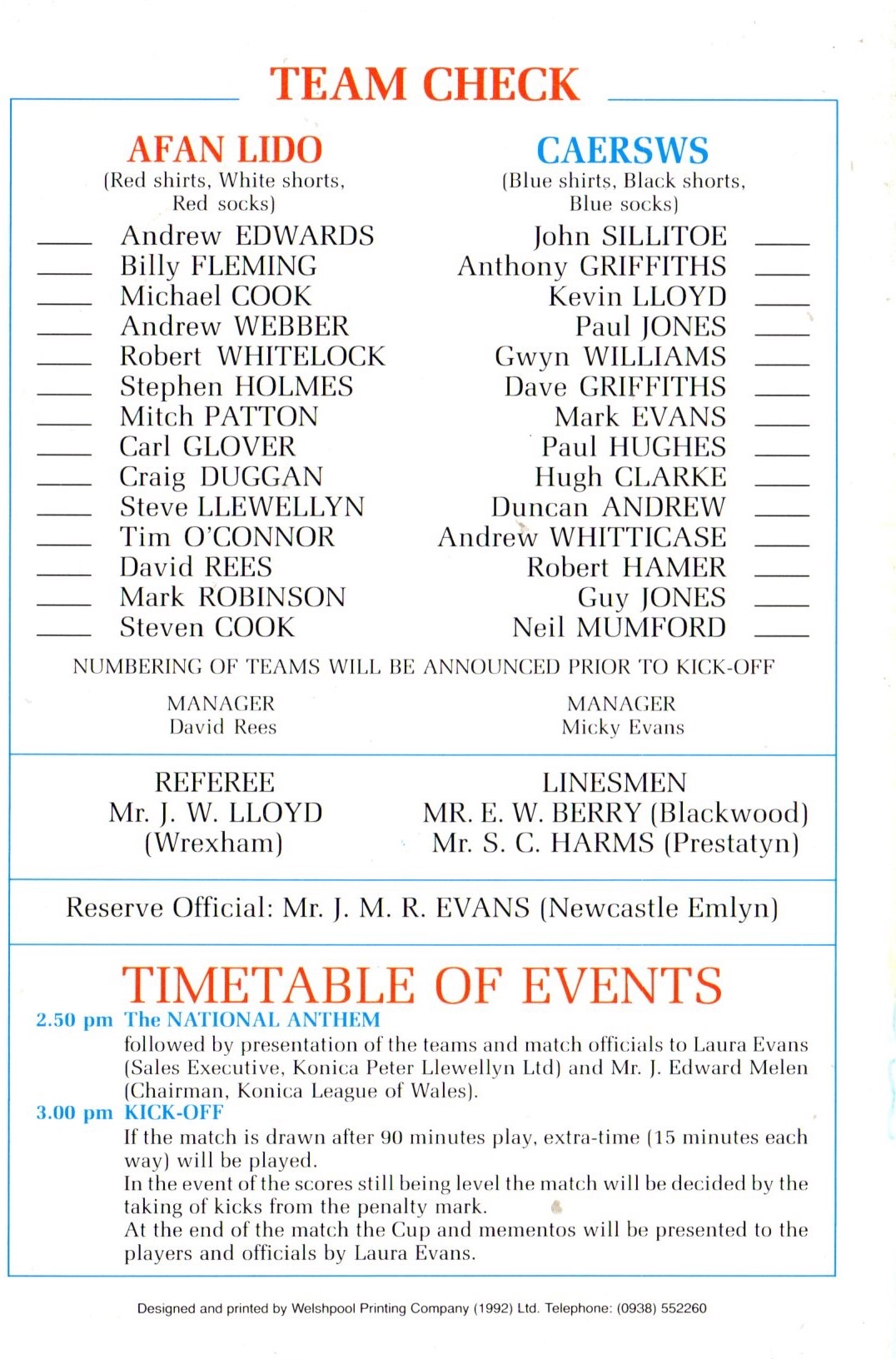 “Every single player in that squad is what you would call an Afan Lido boy,” explained Robinson. “They were all home grown. I think Caersws were all quite local lads as well in all fairness. We knew each other individually for many years, we had been through some tough times together, and some really good times too.

“The local spirit we had meant that we did stick together on and off the field. That camaraderie was important to the club, we were one big family really, and it got us to where we were.

“They were the best times. I was a player back then, and when I was manager I did try to do something similar and we did to some degree with the local players that we had, but to emulate what that side did in those first couple of years in the top division would be impossible to replicate.

“For the local area, the name Afan Lido was pretty prominent in people’s minds, and winning the two cups and then qualifying for Europe meant that the profile of the club became massive. For those boys to put the club in the spotlight at that time after coming through the junior ranks of the club is something that will never be forgotten.”