There is something about Cardiff Met and the Nathaniel MG Cup. The Archers have appeared in three of the last four finals and this weekend they will take on Bala Town for the right to compete in the showpiece once again.

Experienced midfielder Eliot Evans is one of three players – along with Chris Baker and Kyle McCarthy – who have played in all three previous finals and he speaks with pride about the club’s track record.

“We’ve got a really good history in the competition,” Evans says. “We always see it as a good opportunity to get into a final, particularly as there are less teams than in the Welsh Cup and it is split north and south. So we take it seriously from the start of the season and once you get into a semi-final it is anyone’s game.”

Met won the competition for the first time in their history in 2019 when they defeated Cambrian & Clydach in the final, 12 months after losing out on the trophy to The New Saints.

“Winning that final is one of my best memories,” Evans recalls. “We had lost the final the year before and also lost a European play-off final, so to actually win one and lift some silverware was very special. I don’t think we actually played that well in the game but nobody remembers that when you win it!”

It was much less of a memorable occasion for the Archers last year as they were beaten by Connah’s Quay Nomads in the final on penalties following a goalless draw in 90 minutes.

“I feel as though we should have won last year,” Evans suggests. “We had opportunities within the penalty shootout to win it, so it was really frustrating not to do so. It was a really windy day which killed the game in a way, neither side were able to play their best football because of the conditions.” 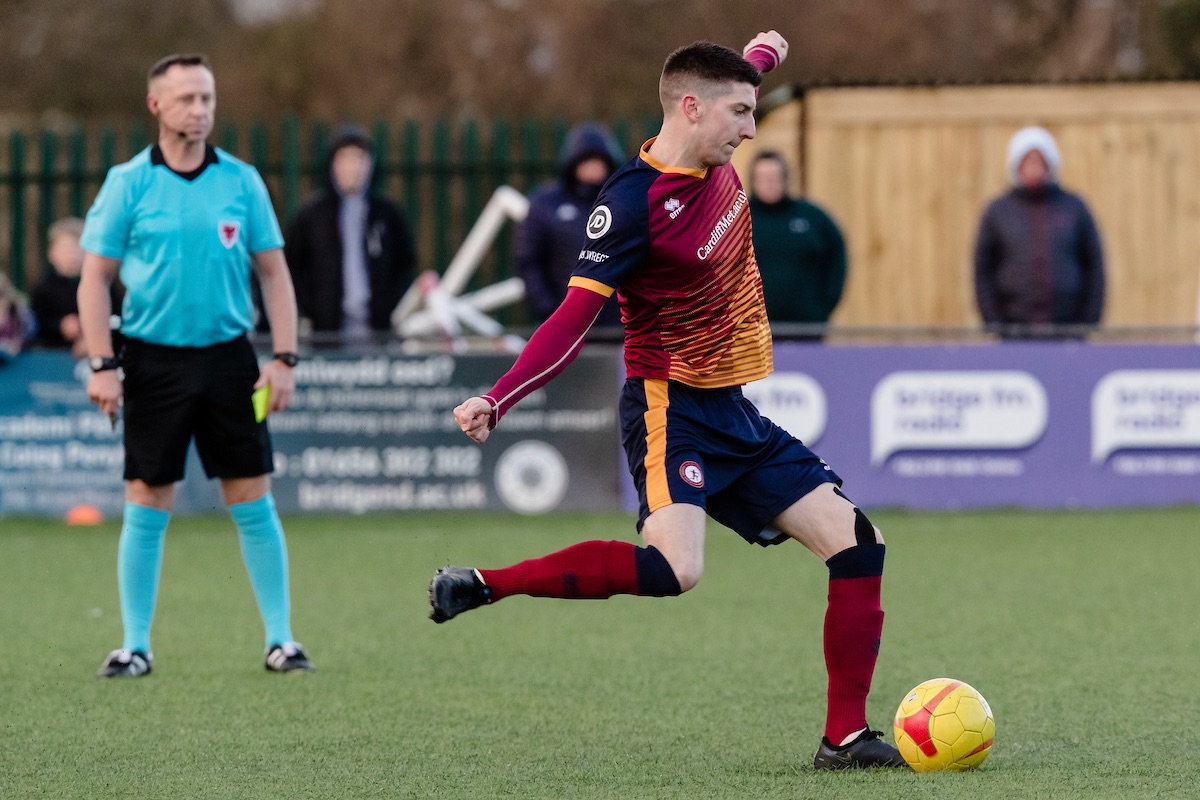 Evans was the unfortunate player who missed the decisive penalty at the SDM Glass Stadium, which was the 24th spot-kick taken in a remarkable shootout. Every player including the goalkeepers took a penalty and Evans had scored his first effort before having to step up again.

“I still get a little bit of stick from the boys for missing the penalty, but what they seem to forget is that I scored my first one!” the midfielder laughs.

“I thought I had done my job individually after scoring and maybe I relaxed a bit which had a negative effect. It came back around, which is obviously very unique. I can’t think of too many occasions of where that’s happened in any football game.”

There was plenty of change at Cyncoed during the summer, as long-serving boss Christian Edwards moved to a director of football role and Ryan Jenkins was appointed as Met’s new head coach. Evans also moved into a coaching role alongside playing, something which the 30-year-old is enjoying.

“It has been really interesting. When Ryan came in he was keen to get a current player on board as part of his staff to keep that continuity because we had a fairly high turnover of players in the summer.

“It can be a challenge for me to juggle being both a player and a coach but I’ve got lots of support around me. It is working well at the moment and hopefully we are on track to finish in the top six and reach the final of this competition.” 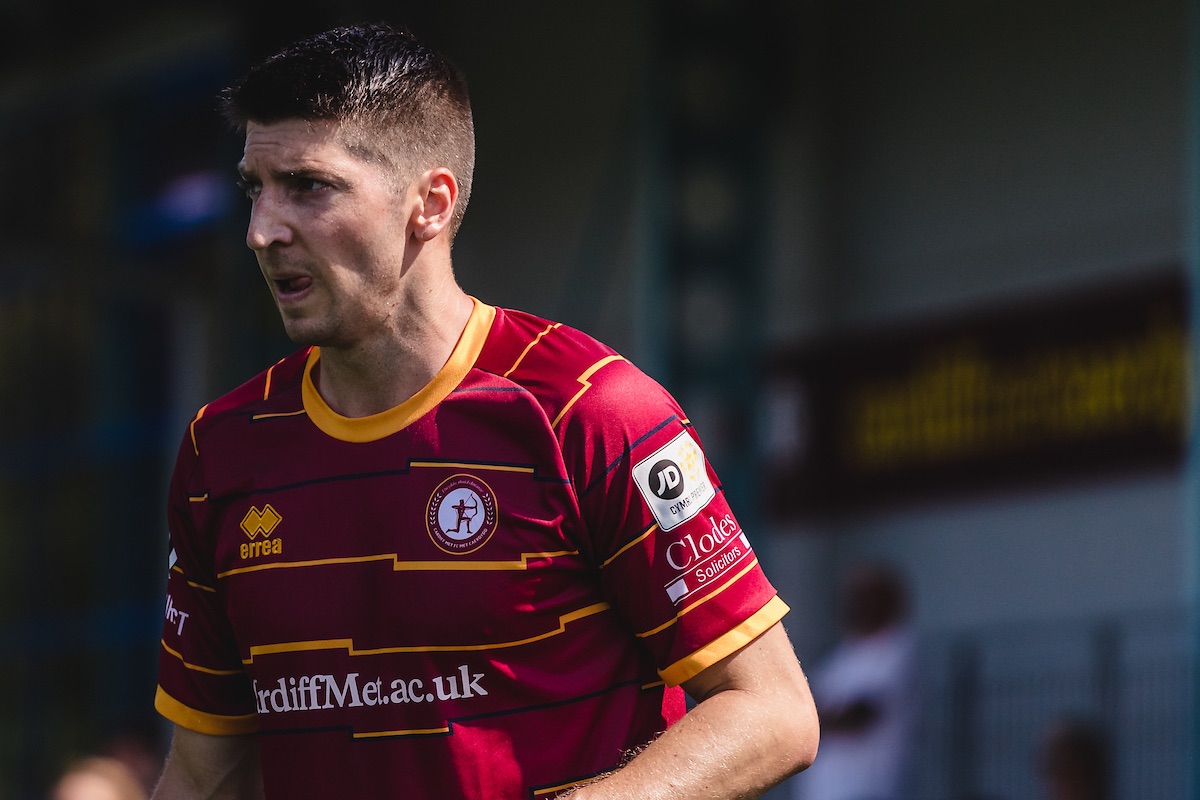 There is certainly no indication that Evans is winding down his playing time though. The midfielder has played in every game in the JD Cymru Premier this season and last weekend scored his fifth goal of the season by tucking away a penalty to beat Bala 1-0 on home turf.

The Lakesiders are Met’s opponents for the second consecutive weekend, but this time Evans and his team-mates will travel up to Maes Tegid for the Nathaniel MG Cup semi-final.

“I don’t know whether they will make changes based off what happened in the league game, but I expect them to field a strong team regardless,” the midfielder says. “They are one of the best sides in the league when they are on form and we always expect a tough game.

“But we have a good record against them, so we will go there with plenty of confidence as we know we have players who can hurt them.”

But just because this is familiar territory for Cardiff Met, it does not mean that making the final would be any less special.

“For a club of our size and stature to get to a final is always an impressive achievement,” Evans says. “Certainly to get there in Ryan’s first season as manager would be a big success too. It would be huge for our confidence for the rest of the season.

“It does come into your thinking that we have got to three finals and lost two, but we don’t need any extra motivation. You want to be able to look back on your career and say, ‘I won this and this’, so to win this competition for a second time is definitely a big aim.”

All six JD Cymru Premier fixtures this weekend take place on Friday night, with plenty of intriguing battles to look forward to.

Match officials for this weekend’s Cymru Leagues fixtures have been confirmed.

It has not been a bad few weeks for Neil Gibson. His Connah’s Quay Nomads side are currently on a 12-match unbeaten run, he was named the JD Cymru Premier manager of the month for October and has been rewarded with a new two and a half year full time contract at Deeside.