Not many players have had a greater impact on Cardiff Met’s recent history than Adam Roscrow.

The striker joined the club in 2014 and helped them win promotion to the JD Cymru Premier, before starring as they won the Nathaniel MG Cup and qualified for the UEFA Europa League in 2019.

However, on Saturday he will be trying to prevent the Archers from reaching another Nathaniel MG Cup final when he lines up against them for Bala Town. He admits that it might be an unusual experience.

“I was on the pitch when we played them in the league in September and it was a bit odd, particularly as I was at a club for so long,” Roscrow says. “But that is the nature of football. I will be playing against mates who I have known for years, but that is the same for a lot of other players.

“It is just a case of getting your head down and trying to get the job done. You have got to put friendships aside for 90 minutes. Ultimately I am there to do a job, it doesn’t matter who we are playing against.

“Just because it is Cardiff Met and I have good memories of the club, it doesn’t make it any more or less of an important match for me. There is a game of football to be won and there is a final at stake.”

Roscrow was the star of the final that Cardiff Met won in 2019 as he scored both goals in a 2-0 victory over Cambrian & Clydach.

“That was a great day for Cardiff Met as a club,” the striker recalls. “After losing the final the year before, we felt like it was time for us to put our mark on something and win a trophy. For me personally to score two goals was a great achievement and a moment that I look back on with fondness.”

Roscrow’s performances had not gone unnoticed and that summer he made a deserved switch to AFC Wimbledon in English football’s third tier.

The New Saints paid a club record fee to bring the striker back to the Welsh system in January 2021, before he made a return to Cardiff Met on loan last season.

The Archers once again reached the final of the Nathaniel MG Cup, with Roscrow scoring three times along the way. However, this time they were denied silverware as they were beaten by Connah’s Quay Nomads on penalties following a goalless draw in 90 minutes. Roscrow had been substituted late in the second half so did not take a spot-kick. 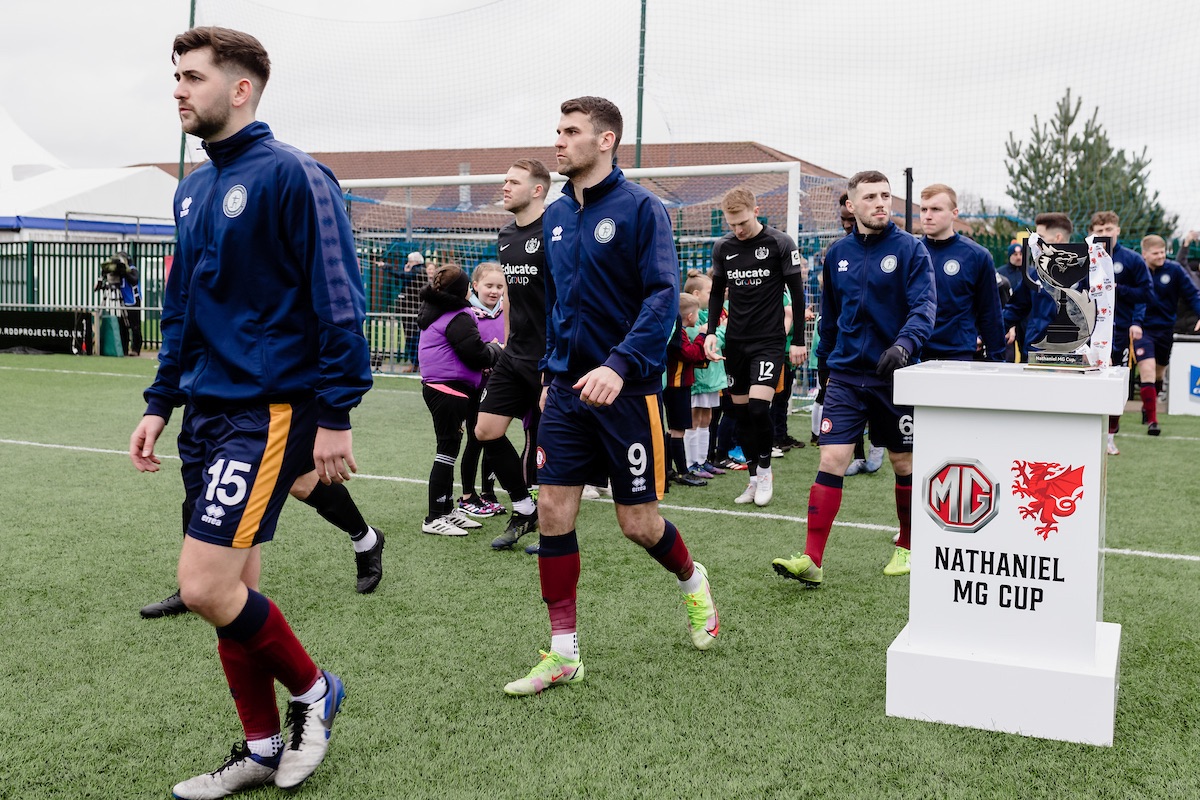 “They were some of the most difficult conditions for any game, let alone when you add the pressure of it being a final,” the 27-year-old says. “It was blowing a gale, the goalkeepers could barely reach the halfway line with their kicks and it kind of spoilt the game.

“The fact it went down to a penalty shootout was not much of a surprise. When you are playing Connah’s Quay Nomads who have the wind behind them, they are relentless. We had opportunities ourselves, but we just couldn’t take them.”

Roscrow made a permanent exit from TNS in the summer, completing a move to Bala on deadline day. He has so far scored six goals in seven appearances, with the Lakesiders currently fourth in the JD Cymru Premier table.

“It was simply the fact that I wanted more game time,” Roscrow says as he explains his decision to join Colin Caton’s side. “It was also important for me that I was close to home in Shrewsbury, so Bala was an obvious choice. I am so pleased that I have come here, I have absolutely loved it so far. All the boys and the everyone at the club has been so welcoming.”

Bala’s last trophy was the Welsh Cup in 2017 and they have never won the Nathaniel MG Cup, having lost in back-to-back finals in 2014 and 2015. But Roscrow is keen to ensure that the drought does not continue.

“It would be massive for the football club to lift the trophy. It is a team that is always pushing at the top end of the league table, reaching the latter stage of cup competitions and competing in Europe.

“But they haven’t won any silverware for a while so I would love to help change that. It is Colin’s 20th season in charge so it would be a nice way to win something to celebrate that landmark.”

Perhaps Roscrow has more history to write in this competition, but first he must get past old friends.

Despite an 8-0 win over Gothenburg in their final group fixture, Tîm Rhanbarthol Cymru exited the UEFA Regions’ Cup at the intermediate round stage.